For several decades, the separation issue between ownership and control has been reflected in agency theory, where providers of services are regarded as agents of the people on whose behalf the service is performed (Jensen and Meckling, 1976; Stulz, 1988). According to Jensen and Meckling, the relation between the financiers and managers – the agency relationship – is “a contract under which one or more persons (the principal engage another person (the agent) to perform some service on their behalf which involves delegating some decision making authority to the agent” (1976, p. 308).  This central contract specifies both the nature of residual claims and the allocation of the steps of the decision process among agents (Fama and Jensen, 1983).

According to this contractual view, presenting all-encompassing contracts between financers and managers, stating specifically how the managers manage every aspect of the organisation is technically infeasible (Shleifer and Vishny, 1997, p 741).  This problem of contractual relationships causes a firm’s behaviour to diverge from the profit-maximising ideal, given that managers end up with right of control and can therefore allocate funds as they choose.  Given that managers do not own the firm, they can have other objectives, such as maximising their salaries or an attachment to particular investment objectives, rather than maximising the shareholder wealth. This is described as “conflict of interest” between managers and shareholders (Jensen and Meckling, 1976; Sheifer and Vishny, 1997). 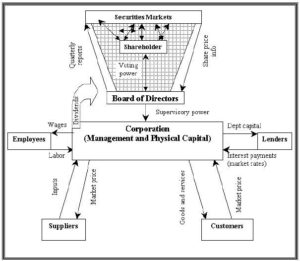 Another aspect arising from the ‘agency problem’, stated by Jensen and Meckling (1976), is “agency costs”, which amount to a value loss to the shareholders.  These agency costs are defined by Jensen and Meckling as the sum of monitoring and bonding costs and residual loss. Monitoring costs are expenditures paid by the owner to measure, observe and control an agent’s behaviour, due to the presence of information asymmetries between shareholders and the agent. Examples of these costs may include the costs of budget restrictions and incentive compensation contracts and even ultimately the cost of replacing managers.

Managers may tend to set up the rules and procedures that try to act in shareholder’s best interests in order to minimise monitoring costs. The costs of setting and complying with these systems are known as bonding costs. They may include the costs of auditing financial transactions by external auditors, and limit the agent’s decision-making rights. Although monitoring and bonding costs represent important components of the agency cost, there are still other agency losses arising from conflicts of interest.  This is known as ‘residual loss’, which represent the reduction of a principal’s wealth resulted from the incurred agency losses after employing monitoring and bonding costs (Jensen and Meckling, 1976).

Sheifer and Vishny (1997, p. 743) present and discuss some standard models of the agency problem that mainly arise from the conflict between managers and shareholders. Managers can simply expropriate shareholders by absconding money; they can set up independent companies that are personally owned, and sell the output and assets of the shareholder company they manage to their independent company at below market price. This is known as transfer pricing. Another form of expropriation by managers is when managers entrench themselves within the firm and stay on the job even if they are no longer competent or qualified to run the firm (Jensen and Ruback, 1983; Shleifer and Vishny, 1989). Grossman and Hart (1986) aptly describe these benefits as the private benefit of control (PBC).  The concept of PBC is extensively discussed in sub-section 2.4.2 about the expropriation of non-controlling shareholders by controlling shareholders. These PBC largely overlap with different types of expropriation, in particular those resulting from self-dealing transactions used in this thesis to examine the impact of legal protection for minority shareholders on equity market performance.

In summary, the separation problem between ownership and control has been extensively discussed in academic literature, and is mainly concerned with the agency conflict. Managers can have a large degree of residual control rights which in turn enables them to extract managerial private benefits of control at the expense of shareholders, as they have their own objectives that represent priorities rather than maximising the shareholders’ wealth.

This conflict of interest between management and shareholders the main subject addressed in finance literature. The focus of the literature has been possible solutions for such conflict and minimising the agency cost. The proposed solution of the incentive contract has its own shortcomings as it can create problem of managerial self-dealing. Another solution was in presence during the last decades will be discussed in the following section, by which shareholders grouped in order to be large and then retain sufficient residual control to counter managerial agency problem. Similar but more severe to incentive contract, we will see that such presence of large shareholders can create ownership-related conflict with more broad ground with three way directions and more wide-ranging minority shareholders expropriation opportunities.