The US has punished Chinese companies for Uighur oppression, but ignores an Israeli surveillance state that routinely intimidates Palestinians

The United States has traditionally positioned itself as a champion of human rights around the world, speaking out for dissidents and minorities in Syria, China, Russia and Iran. The US government has frequently employed restrictions or bans on the sale of arms and other equipment used as instruments of subjugation.

Recently, the US sanctioned Chinese firms that produce and sell surveillance technology used to help screen and detain Uighur Muslims, banning federal entities from purchasing video surveillance equipment produced by Hikvision, Dahua and Hytera Communications. Hikvision and Dahua were also placed on a government blacklist that prohibits US-based companies from exporting products to the listed businesses.

China’s treatment of Uighurs deserves severe international condemnation – but were the US government’s motives really altruistic? President Donald Trump’s administration is locked in a bitter trade war with China, and many of the business interests that have his ear believe security systems in the US are too reliant on Chinese surveillance products.

But perhaps the best evidence that US foreign policy is not guided by concern for human rights is its highly inconsistent and frequently contradictory track record elsewhere around the world. Consider, for one, the lack of action when it comes to technology companies that produce munitions and surveillance equipment used by the Israeli government to repress, abuse and even kill Palestinians in the Gaza Strip and the occupied West Bank.

At the same time, US companies are allowed to actively profit from Israeli oppression

Palestinians in these territories live in an oppressive limbo, with no nation of their own and no ultimate power over their lives. Israeli forces regularly confiscate private land; imprison people, including children, without due process; physically abuse detainees; demolish family homes; bulldoze orchards and crops; place entire towns under curfew; destroy shops and businesses; and shoot, maim and kill civilians.

Enabling this matrix of control is a plethora of technologies, including phone and internet monitoring, CCTV systems and biometric data collection, which have enabled Israel to surveil the Palestinian population on a massive, intrusive scale.

US foreign aid to Israel

Despite this persecution, which is at least as visible and long-running as China’s treatment of Uighurs, Israel is the largest cumulative recipient of US foreign assistance since World War Two – more than $142bn, almost all in the form of military assistance, including support of surveillance activities.

At the same time, US companies are allowed to actively profit from Israeli oppression. Just last month, software giant Microsoft was reported to have invested in a startup that uses facial recognition to surveil Palestinians throughout the occupied West Bank, despite the company’s public pledge to avoid technology that curtails democratic freedoms.

The startup, called AnyVision, is headquartered in Israel and has close ties to Israel’s military and intelligence services. On its board of advisers is former Mossad head Tamir Pardo, and its president is Amir Kain, who served as director of the defence ministry’s security department from 2007 to 2015.

The company sells an “advanced tactical surveillance” software system ironically called Better Tomorrow, which is reportedly at the heart of a secret Israeli military surveillance project deployed throughout the occupied West Bank. The Israeli newspaper Haaretz reported that cameras “deep inside the West Bank try to spot and monitor potential Palestinian assailants”.

The US firm Cisco Systems has also established hubs in the occupied Palestinian territories, augmenting Israel’s visual-surveillance apparatus in Jerusalem.

As Ariel Handel and Hilla Dayan write in “Surveillance and Society,” Israel can be “seen as a laboratory for population management and surveillance, that may be helpful for understanding ‘the authoritarian turn’ in the Global West and beyond”. 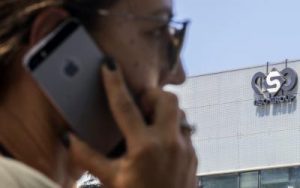 How Israeli spy tech reaches deep into our lives

They note that the Israeli state is increasingly using these technologies on people within its own borders: “Any disruption … that implies, in however minor way, that the project [of occupation] is not accepted by practically everyone, is a liability for normalisation that is met with intimidation, harassment, and legal persecution.”

What begins with oppression of the “other” often spreads to a greater pool of people, even those belonging to an oppressor’s in-group. What is happening in China is happening to Palestinians and even their Israeli sympathisers, as well as to other people around the world.

We should all be concerned, even if we are not the ones being targeted – because if there is no one to challenge these oppressive practices, they will only increase. Abuses of ordinary citizens should be called out and boycotted wherever they are exposed: in Israel, China and beyond.

The views expressed in this article belong to the author and do not necessarily reflect the editorial policy of Middle East Eye.